There are quite a number of aspects to Qi Gong training and one of the most important would be breathing. Yes, there are many other facets to the training of Qi Gong. Certain movements, postures and meditation approaches. However, it can be said that the way your breathe plays an important role in the cultivation of Qi Gong. This is evidenced in the many internal Chinese martial arts designed to help cultivate Qi Gong power.

This can be evidenced in the many Tai Chi exercises which are performed by those that use this classical holistic martial arts. This is clear in the opening of the legendary Yang 24 form where the hands are raised high in the air and then lowered in a slow and deliberative manner. While doing such movements, it is common that deep breaths will be taken. Actually, controlled breathing is usually done through the entire form. This is also a common thing to do when performing the very brief Tai Chi warm up exercises. Once you look at how much attention is centered on breathing during these exercises, it becomes clear that the control of one’s breath remains a very major aspect of Qi Gong.

So, why is Qi Gong breathing so important? 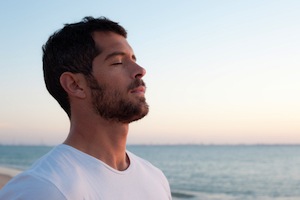 It has been said that the way you breathe will have a huge impact on how you feel. It might even have a major impact on your overall health. Labored, heavy breathing might not be very helpful and being able to properly regulate your breathing can have numerous benefits to it. Those that have panic attacks will suffer from hyperventilating which could be brought under control with more controlled breathing.

These are all the commonly known benefits of helpful breathing. However, there is another significant reason why Qi Gong breathing is so very important. Qi Gong is based around the theory that Qi Ging exercises can aid in helping the flow of Qi travel through the meridians of the body. When Qi flow is enhanced, the body can experience significant improvements in many areas of health. Breathing can be considered one of the conduits in which Qi can flow through the body via the breathing that has been improved.

One of the more interesting historical benefits of enhancing breathing via Qi Gong is that through enhancing your breathing, you have the potential to connect yourself stronger with the spiritual world through effective breathing. The is because the breathe is considered the link between the natural world and the spiritual world. It is also believed that there Qi flow enhanced by better breathing can contribute to preventing the body from suffering from illnesses.

How can one use Qi Gong breathing in a manner different from other forms of breathing control?

These improvements in breathing can be achieved through what is dubbed conscious breathing. When we breathe, we are not aware of the fact we are doing it because we are simply taking part in the natural process of breathing. Those that engage in cardiovascular exercises will experience improvements in how they breathe, but they will not be attempting to actually use their breath for a specific reason or goal. With Qi Gong breathing, the use of the breathe for cultivating Qi remains a major goal. As such, one does have to be conscious about the process in order to get anything out of it.

There are quite a different number of focused breathing strategies. Those that wish to breath in the lower abdominal region will find this can help deal with blood pressure and also aid in calming and relaxing the mind. Breathing more in the belly region can have an effect on the kidneys. Breathing in the chest areas can be considered a means of helping with heart and lung health. There are quite a number of different breathing exercises which can be used to help strengthen the body in many ways. Circular breathing, tummy breathing, and tortoise breathing would be such examples of the different approaches towards effective breathing methods.

You will not learn how to get the most out of your Qi Gong breathing overnight. However, if you do take the time to deliberately practice, you will become more aware of your breathing patterns. This will definitely contribute to your ability to get the most benefit from the exercises.